We pride ourselves on being family-owned and operated. This hands-on approach helps us stay in touch with our customers’ needs. Over the past few years, RSS has followed an aggressive growth program, elevating us to our present position as the largest roll shutter manufacturer in the western United States.

In 1997, RSS purchased industrial land and built our current manufacturing plant, showroom, and offices. This state of the art facility has provided the space needed to become more efficient. 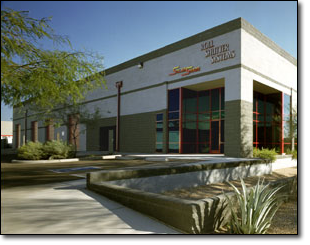 With the recent acquisition of a custom roll forming a line and a fully automated fabrication machine, our production output has increased by almost 60%. This equipment has reduced our production costs as well as enabled RSS to provide faster lead times.

After more than 20 years, we are still family-owned and operated, continuing to provide the very best quality products to local customers as well as to architects, builders, interior designers, and our nationwide network of independent dealers and distributors.

Roll shutters were developed in Europe over 80 years ago. Originally, this product was intended as an energy-efficient window treatment. As WWII progressed in Europe, roll shutters became a necessity for blackouts during the allied bombing raids. When air raid sirens alerted shop and homeowners that bombing was imminent, they lowered the roll shutters over their windows and doors. Thus, glass was protected from flying debris and lights could remain inside their homes.

Since that time, roll shutters have become extremely popular not only in Europe but around the world. In many European countries, such as Germany, Italy, France, and Spain, roll shutters are a standard feature on homes and businesses. The roll shutter business has grown to become a multi-billion dollar industry. The products’ popularity has spread to the Middle East, Australia, South America, and to the United States.

Here in the United States, roll shutters are used for a variety of applications. In the Southwest and the North. They are used for energy savings, security, light control, and a host of other reasons. Hurricane protection is the primary use in coastal areas such as Florida, Texas, and the Southeastern seaboard. The industry was started in the U. S. over 40 years ago and has been a phenomenal success.

Roll shutters are known as a versatile product. Whether your concern is energy savings, security, noise abatement, or privacy, roll shutters by Roll Shutter Systems are the “Solution”.

Roll shutters are becoming increasingly popular throughout the country as a preferred window treatment. The ease of operation and availability of automated controls make roll shutters an excellent choice for energy savings, light control,
privacy, and security. Many home builders, architects, and interior designers are using our roll shutters as an integral part of their design.

State of the art technology in automated controls has propelled the industry to a new level. Roll shutters can be connected to home automation systems, remote controls, timers, sun/heat sensors, battery back-up systems, etc. This technology has significantly increased the demand for our products as consumers look toward more innovative products.

Roll Shutter Systems products are the ideal choice for a multitude of applications. Whether it is for windows/doors, patios, countertops, storefronts, etc., we have the products to fit your needs.

After over 38 years, we are still family-owned and operated, continuing to provide the very best quality products to local customers as well as to architects, builders, interior designers, and our nationwide network of independent dealers and distributors.